The latest and most comprehensive study to ever look at the safety of packaged ice has been published in California.  The study compared packaged ice produced by members of the International Packaged Ice Association to those who manufacture ice without the industry-leading IPIA standards.  This study definitively shows that consumers are at risk due to the amount of packaged ice produced by non-IPIA retailers in California that was found to have unsatisfactory levels of contamination. 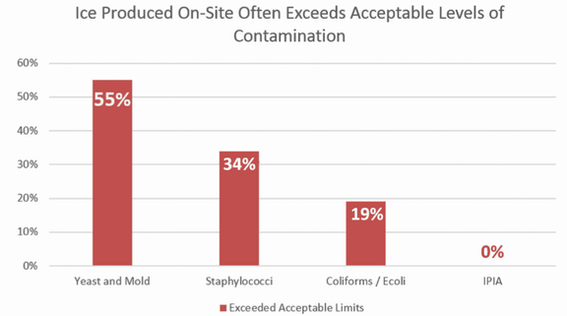 The latest findings from the study conducted by Cal Poly demonstrate troubling findings about the quality of packaged ice produced at many retail locations:

Researchers from the University of Georgia recently concluded that since millions of pounds of packaged ice are produced by retailers and vending machines, a lot of this ice could put the consumer at risk.

University of Georgia researchers examined the microbiological quality of packaged ice produced and bagged at retail locations—convenience stores, liquor stores, fast-food restaurants and gas stations, plus ice produced at self-serve vending machines—and compared those results with ice produced by manufacturers that comply with the International Packaged Ice Association’s (IPIA) Packaged Ice Quality Control Standards (PIQCS).  It is apparent from the study results that sanitary practices in producing and packaging ice are not being followed by many retailers and vending machines.

While researchers found that ice produced under the PIQCS standards was void of harmful bacteria, over 25 percent of the ice samples from retail store producers and self-serve vending machines showed unsatisfactory levels of contamination.  According to the report, “Consumers who buy this ice (non-IPIA) should also be educated about the risk they take by purchasing this product and ways they can also prevent cross-contamination in their homes.”

The authors continued, “No coliforms or E. Coli were detected in the ice from manufacturing plants (IPIA) which indicates good sanitary, hygienic practices may have been in place.”
​
In response to the study, Jane McEwen, IPIA Executive Director stated, “We believe the results of the UGA study are groundbreaking.  The study results demonstrate that the quality of the packaged ice produced at retail locations and self-serve vending machines is suspect and, where contamination was found, could indicate a contaminated water source, mold and slime in the ice machine, unsanitized ice scoops, unsanitary packaging process or unhygienic staff handling. We have suspected these unsanitary conditions for a long time and now the study results affirm it.”  McEwen continued, “The flip-side of the study shows that ice manufactured to IPIA sanitary standards is clean and safe to consume.”

Confirming the findings of the recent studies in California and Georgia on the poor quality of packaged ice that is produced on-site at retail locations, a series of other academic studies have shown similar results. Indeed, researchers have routinely found that packaged ice that is not produced in compliance with the IPIA’s industry-leading Packaged Ice Quality Control Standards have unacceptable levels of contamination. 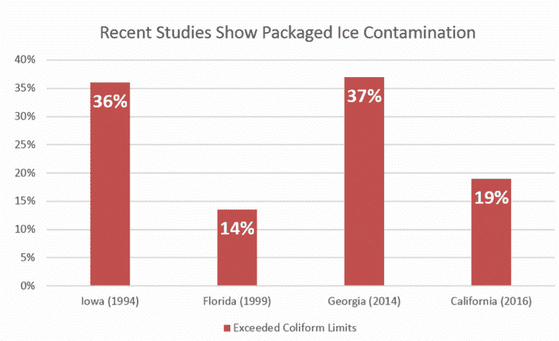 ​In 1991, The University of Iowa conducted a comprehensive evaluation of packaged ice. It concluded that, “Ice produced in convenience stores was of consistently poorer microbiological quality than ice produced by major commercial producers." This study reported that all on-premises manufacturers had microbial counts above the standard. They further concluded that the potential for transmission of disease existed.
​The State of Connecticut inspected 76 establishments during February, 1992. Approximately 90% of the establishments were on-premises operations. Of the 76 establishments, 65% were not operating in a segregated area; 39% had no hand washing equipment; 39% had unsanitary equipment; and 63% did not have the product properly labeled. Food Division Director, John McGuire, noted, "This survey indicates that many establishments have added ice cube manufacturing equipment to their facilities without the proper knowledge of food processing and without proper approval from a regulatory agency.”
Michigan State University surveyed packaged ice in Southern Michigan. In its August 1993 report, it found concerns over packaged ice quality. High plate counts were exhibited in 38% of samples and 10% had detectable coliform contamination. Their greatest concern was over the lack of package labeling, leaving no way to trace the product to its manufacturer. This also meant no way to recall contaminated product or to perform epidemiological follow-ups of disease outbreaks.
The University of Florida conducted a packaged ice study in the late 1990s only to find that ice produced in unregulated conditions in convenience stores was of substantially poorer microbial quality than ice produced by commercial producers.
In 2014, Ryerson University in Toronto, Canada conducted a study on the microbiological quality of ice in food premises. This study found that “consumable ice presents a potential hazard due to microbiological contamination".  Approximately 35% of ice storage units were dirty, amongst other findings.
​Studies focused on hospital ice and hospital ice-making machines from 1994, 1997, and 2009 all confirmed problems with the microbiological quality of ice in hospital settings.